Dang, the holidays are at an end... once more. They go by too quickly for my liking. Sigh...

Now, when the trailer was shown at the Spike Video Game Awards 2010, there was a lot of buzz from the fans. In the canon ending of SW: TFU I, the hero seemingly died in matyr style. However, after the trailer was screened, it showed Galen Marek in full strength, sporting dual blue lightsabers (in the first game, he held a red-bladed one). Storyline hasn't been told, except that the game will take place after the first game and still within the period of between Star Wars Episode III and Episode IV.

A new name in the Star Wars Expanded Universe, Star Wars creator George Lucas stated Galen Marek as the 'true' founder of the Rebel Alliance, which will eventually overthrow the Galactic Empire in Episode VI.

To non-Star Wars fans, this might have been a load of tosh. So I guess I'll stop here. Full details of the previous game and Galen Marek would be found in Wikipedia and Wookipedia, the free web encyclopedia exclusively for the Star Wars universe.

Below is a poster of our hero holding his blades in a most dashing way. Later, readers. 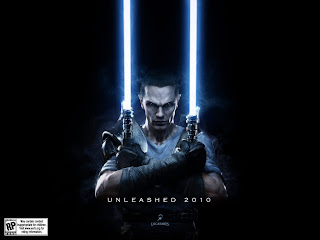 Posted by draugr at 9:57 PM No comments:

Of Princesses and Singing Bards

It was Valentine's Day yesterday. And a girl did proposed to me. But I think she just slipped it out not on purpose. Heh.

No prob, Jacie. Just looking out for ya. Hey, you're the Princess almost giving up on a gorgeous knight to save you from your locked tower. And I'm just a Bard with a benjo, telling you that that knight will come, sooner or later.

I think this is the third time, but who's counting on how many greetings I give, eh? Happy Valentine's Day, Jacie.

I was so freakin' excited when I heard it was the TIGER'S turn this year for CNY. But before I get all weak in the knees and whatnot, I'd like to wish everyone I know (and the ones I don't) a very happy Chinese New Year. Prosperity rules!

Which reminds me of McDonalds' Prosperity Burgers. Do you know they recently served double the beef/chicken patties now?

Sorry, veering off course there. So, this year's CNY is the Year of the Tiger and this 14th Ferbuary2010's elemental sign for the tiger is the Metal Tiger. Aha, surprised I know this, yeah? Well, I did a lil bit of digging, and it was pretty interesting. I simply can't wait for the Year of the Dragon. Powerful, majestic, mythical creatures, dragons are (even though they're not real).

Here's something else that's as interesting. The white tiger is the Primal Spirit for Metal, or as the Chinese refer to it, Wu Xing.

There's also something about tigers that people born in the Year of the Tiger should be proud about. Tigers show incredible bravery, the willingness to participate in combat and undying courage. They are also described as lucky, lively and engaging. Best protection from the evils of fire and burglary.

Yes, I was quite surprised myself that I took the initiative to find all I can about this particular subject. Anyways, HAPPY CHINESE NEW YEAR. Go TIGERS! Later, readers!

Posted by draugr at 5:14 AM No comments:

I was chatting with an old friend from Perak... and he told me about this lil crush he had on this girl in his class. The way he talked about her, wow, I was afraid I might have fallen for the girl myself. So, pal, I dedicate this little story here for you. That'll be five bucks for this post; blogs ain't cheap.

''There she was... (I won't say her name; so I'll describe her as 'she') just came in class a few days ago. I was in the accounts stream, and not many people were in favour for it. But 'she' certainly was. I saw her doing questions before; in front, at the blackboard. Solving those mathematical questions like it was child's play. I think even the teacher was envious of her. Last pop quiz, 'she' was the only one who scored 90% something for it. Oh yes, she's very 'brainy' and god, she is beautiful.

I talked to her a couple of times. She told me that she was half a Malay, and half an Indian. That fact suprised me, and I even held myself back for a moment (I'm sorry, my friend can be a little err...touchy) but after confiding in a friend (moi?) I found myself not caring. She was pretty, smart and so funny. But the thing that intrigued me the most... it was her eyes. Her lovely eyes.

It was a soft brown, not too dark, yet not too bright. It was balanced, and make you think of chocolate. And when she smiled... it was a complete package. Her eyes, her smile... it made my heart leap and beat a million times faster. Have you ever heard a melodious chirp of a flock birds? She laughs like that. I yearn to hear it everyday.

I'm not ashamed to say I've fallen for her. What boy in his right mind won't? I knew this at once when I saw her talking with other boys. It was jealousy; and that only happens if you have feelings for someone.

I hope everyday, that there will come a time, and I'll look into her lovely eyes, and tell her my affection for her. I'll be looking into her eyes then; her lovely eyes.''

Now, he clearly emphasised on the usage of 'lovely eyes'. I can grasp a measure of what he meant. The poor boy's in love; the way he talks about the girl. I really wish I can meet this girl someday. Wow. Later, readers.

Yeah, never actually joined Road Run before. But well, since it's my last year, I decided to take part. And I never really realised... it was so damn fun.

The school was in chaos (a good kind of chaos, amidst cheering and chattering) in the morning while all of us took our numbers. We were kinda behind schedule, since the Run was supposed to start at 8.00 but the number taking event was taking a lot of time. So we actually ran the Run at 9.00.

It was kinda refreshing, actually. I started off with a slow jog, but of course, I was eventually left behind. I sprinted a few times, but I daresay I could only last for about 0.5 seconds, considering my size, in those sprints.

Something funny happened near the end. I was metres away from the school, running with a friend. I wasn't actually paying attention to my front -- and believe it or not -- I banged into a bus stop sign post. Yeah, stars were popping around me, but I kept running.

I finally ran the entire Run and I think I was around number 50+. But never mind, it was a good run. Burnt all the fats in me anyway. The sense of accomplishment was really good inside my head and my heart.

Too bad the Road Run's not gonna happen next year again... for me, that is.
Posted by draugr at 7:53 PM No comments: